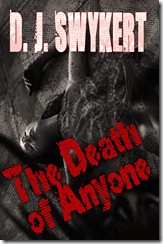 The underlying theme in my latest book, The Death of Anyone, poses the Machiavellian question: Does the end justify the means?  I developed this story around an impulsive homicide detective, Bonnie Benham, who wants to use Familial DNA, a search technique not in common use in the United States.  Only two states even have a written policy regarding its use, Colorado and California.  Many legal analysts believe it violates Fourth Amendment rights which guard against unreasonable searches and seizures.

Bonnie is a no nonsense cop who describes herself as a blond with a badge and a gun.  She has her own answer to the ethical use of Familial DNA, but the actual legality of its use will be determined in a real life courtroom in the California trial of a serial killer dubbed by the media: ‘The Grim Sleeper’.

Lonnie David Franklin, ‘The Grim Sleeper’, was caught because his son’s DNA was the closest match to DNA collected at the crime scenes in the database.  Investigating Franklin’s son led them to investigate Lonnie Franklin.  But there was no direct DNA evidence that linked Lonnie to the crime scene until they obtained a sample from him after his arrest.  Lonnie Franklin will be the first person in the U.S. to ever stand trial based on Familial DNA evidence, and its admissibility issues in court will be thoroughly tested by defense attorneys.  These are the very same issues that face Detroit Homicide Detective Bonnie Benham and form the plot of my story.

I’m a blue collar person from Detroit.  I’ve worked as a truck driver, dispatcher, logistics analyst, operations manager, and ten years as a 911 operator, which was the very best job of them all.  I have a pretty straight forward style of telling a story.  I write a book like you’d watch a movie and put it down on paper.

Detroit Detective Bonnie Benham has been transferred from narcotics to homicide for using more than arresting and is working the case of a killer of adolescent girls.  CSI collects DNA evidence from the scene of the latest victim, which had not been detected on the other victims.  But no suspect turns up in the FBI database.  Due to the notoriety of the crimes a task force is put together with Bonnie as the lead detective, and she implores the D.A. to use an as yet unapproved type of a DNA Search in an effort to identify the killer.  Homicide Detective Neil Jensen, with his own history of drug and alcohol problems, understands Bonnie’s frailty and the two detectives become inseparable as they track this killer of children.

I first heard about the use of Familial DNA working as a 911 operator in 2006.  It came up in a conversation with officers working a case.  I thought at the time it would make an interesting premise for a book.  I began writing the mystery some three years later after leaving the department.  I had just finished editing a first draft of The Death of Anyone in the summer 2010 when news of ‘The Grim Sleeper’s’ capture in Los Angeles was released.  I read with interest all the information pouring out of L.A. regarding the investigation and the problems confronting prosecutors.  All of which are explored in The Death of Anyone.

D J Swykert is a former 911 operator.  His work has appeared in The Tampa Review, Detroit News, Monarch Review, Zodiac Review, Scissors& Spackle, Spittoon, Barbaric Yawp and Bull.  His books include Children of the Enemy, a novel from Cambridge Books; Alpha Wolves, a novel from Noble Publishing, and The Death of Anyone which is his third novel, just released by Melange Books.  You can find out more about him and how to buy his books on the blogspot: www.magicmasterminds.com, they are also available at Melange Books, Amazon and at select mystery bookstores. He is a wolf expert.