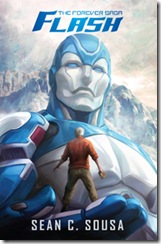 The Forever Saga: Flash, by Sean C Sousa, has an opening chapter that leaves you wanting more.  The first scene is a classic science fiction location, filled with remarkable constructions and characters, that is far beyond our understanding.  Beyond this, however, you discover some clever juxtapositions: age against youth, the extraordinary against the mundane.  The story’s pace ranges from the amble of the aged, through the quickness of youth, to the soaring of the overarching peril.  There are also subtle links between each, such as the troubled love lives of Brian and Jason Renney.  Some readers may find the shifts in pace and content difficult, but it really is worth the small effort required to read the story without skipping over parts.  You are, after all, being presented with genuine characters, with lives beyond the story itself.  I found the strong characters most impressive, as was how quickly they become “real”.  In fact, the characters, and their relationships, are refreshingly realistic.

From the very beginning, the science fiction aspects of the novel are very well presented, creating a believable science.  It’s good, hard core stuff, which I believe actually enhances the contrast between it and the “mundane” nature of the other, more “real life” portions.  I will admit that the moment the mundane collides with the fantastic might have benefited from a greater sense of unreality and confusion on the part of the ‘normal’ characters, with a healthy dose of disbelief and denial.  There are one or two places where characters possess knowledge which seems rather inexplicable at this same point in the story, which is a shame when continuity has been so well maintained up until then.  The hardest part to swallow is in the flashbacks to Vietnam experienced by Brian Renney, who is presented almost as some kind of super soldier, capable of feats of daring and physical prowess far beyond what I would regard as credible.  Those moments could do with toning down somewhat.  The other action sequences are well written, making you want more.  The pace of the novel picks up so gently that you barely notice that it’s become far more urgent, demanding that you continue to read as quickly as possible.  The growing sense of an impending collision between good and evil is inescapable.  I have no desire to spoil things for readers and, as a consequence, I’ve really struggled to know how to say this: there is a part of the novel that I find immensely moving.  It is very well written indeed.  I will say no more on it.

If I have a gripe, it’s one that’s all too common these days.  Whether it’s a fault in proofreading or in production, I can’t know, but there are many problems with typographical errors, spelling mistakes and missing or misplaced words.  This isn’t a criticism aimed at Mr Sousa!  In fact, as already intimated, it’s not even aimed at this novel.  These problems appear in every book I’ve read in recent times.  I tend to read more than one book at a time, which now usually means a traditional book and an ebook.  There’s very little difference in the number of errors in either.  It is a pet peeve of mine,I freely admit.  It is a shame that authors are, effectively, being embarrassed by such problems.  The problem that tends to plague ebooks, specifically, is one of formatting – which often seems “broken”, but this might be a result of formatting for one type of ebook but publishing in multiple forms, by just converting the original ebook format rather than publishing from the original document file(s).

Now, to close.  If anything I’ve said above is putting you off reading this book, then please reconsider!  Any review is subjective.  Things I may love, you may hate, and vice versa.  This is definitely a novel that deserves more exposure.  Apart from the charming nod to the Flash Gordon comics, and the fact that this is an adventure worthy of the early days of heroic science fiction, it’s also bang up to date too.  That’s quite an achievement.  I would recommend The Forever Saga: Flash to all science fiction fans, and especially those with fond memories of the early ‘pulp fiction’ (no, not the movie!) days of the genre.

Five stars all the way.

Sean C. Sousa never planned on writing a novel – that is, until the idea for The Forever Saga came along.  He first conceived it as a video game design concept, then a screenplay, and finally a written work of fiction.  His debut novel, The Forever Saga: Flash, marks the end of one six-year journey toward publication, and also the beginning of another: to bring his stories to a worldwide audience.

His dream is to see fiction inspire positive social change in the world, calling attention to issues of social justice and mobilizing his readership to meet the needs of those afflicted.

Mr. Sousa resides in Southern California with his wife, Shelley, and when he is not writing further adventures about the Renney family, he is usually up to socially acceptable mischief with his friends and family.

The Forever Saga: Flash may be purchased from Amazon.com.