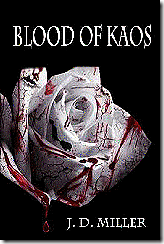 Let me start by saying that I received a copy of the ebook, Blood of Kaos by J D Miller, from the author.  This has not influenced my review in any way, as I fear you’ll discover.

I have to say that the story has great potential.  It is inventive and has good characters.  Unfortunately, it’s in serious need of revision and editing.  There are glaring errors, inconsistencies and awkward sentences.  There are passages where the tense appears to change – possibly for dramatic effect, but I’m afraid it often just seemed clumsy or confusing, to me.  It’s not always clear which character is talking during sections of narrative, or who they’re talking to, and sometimes avoidance of ‘he said, she said’ in the narrative passages results in some peculiar phrases.  There are often leaps in the story which require you to disregard the fact that something hasn’t been explained or described – at all.  Another area which causes some confusion is the flow of time.  The fact that time moves differently in different realms isn’t mentioned until you’re well into the book.  The reader simply finds something entering the narrative out of thin air or a sense of ‘fractured time’.  This may, to some extent, be the consequence of drastic editing changes which were not then harmonised, but I can’t say that with any knowledge of how the book was written and edited.  In all honesty, if it was professionally edited, I would sack the editor!  In a book where some degree of otherworldliness may be anticipated, there is still a need for logic, and I’m afraid that the logic seems to be missing in several instances.  The ‘Kaos’ of the title, which has a definite link to ‘Chaos’, seems to rule too often.  There are times in the story when you hit a passage that is very good indeed, but I’m afraid that those just make it harder to cope with the sections in between.

All of that said, I honestly believe that J D Miller has a great story here.  It just needs a lot of work.  While there are familiar concepts, there are enough new ideas to make it worthwhile reading, once it’s fixed.  I firmly believe that this is a story worth rescuing!  The principle characters are very nearly what and where they need to be, which shows that J D Miller has a great feeling for them.  They just need some help to dwell somewhere worthy of them.

I truly regret that I can’t recommend buying the book, or ebook, in its current condition.  I give it 3 stars out of 5, for the originality of the story, the quality denying it any better rating and, indeed, threatening to reduce the rating if reviewed by those more interested in the technicalities than the inventive creativity.

I never take pleasure in giving a negative review, and this is particularly true when I encounter a story with so much potential.