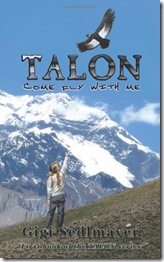 Talon, come fly with me by Gigi Sedlmayer

The first novel of the Talon series.

Nine-year-old Matica lives in a remote little village on a dry plateau in the Andes of Peru. She moved here with her Australian missionary and schoolteacher parents when she was five years old. Ever since she could remember she faced cruel rejection because of her growth handicap. She is trapped in a body the size of a two year old. Because of that the local Indians wouldn’t accept her into their community or allow her to play with their children. Under the watchful eyes of her parents who understand her, lonely Matica explores the plateau for entertainment. And so with patience and a sense of adventure she befriended a pair of condors and named them Tamo and Tima. A strong bond and love developed between them.

Having an egg, Tamo and Tima try to fight off a couple of poachers but they succeed in stealing their egg from its ledge. Eventually Tamo drives them away and the poachers leave the egg. Being unable to bring it back to the ledge, Tamo and Tima make it clear to Matica to take care of the egg, so she does.

Exactly on Matica’s tenth birthday, the condor fledgling ‘Talon’ hatches. The book then describes in detail how Matica helps Talon grow into the majestic bird he was meant to be.

This is the beginning of a time of incredible adventures with Talon and Matica, which is carried on in subsequent Talon books.

Recommendation in LinkedIn about my  series from:

Jay Miller has recommended your work as Talon, on the wing at Talon, come fly with.

I’ve written this recommendation of your work to share with other LinkedIn users.

Details of the Recommendation: “Also being an author of children’s books myself, I was so taken in by Gigi’s first book, Talon, come fly with me. She is a wonderful writer that children will gain much understanding of love and respect for others from. I see now she has published two more books in the series which I am eager to read. Wonderful!”

With a goal as high and lofty as the unspecified pursuit of knowledge, there may not be a clear point at which to stop. Acting as one has been taught to can seem to hold just as much purpose as the actual reason for taking those actions. When the growth of technology begins to hold the same powers as religious doctrine has declared divine, does the simple recording of events become blasphemous? Who’s to say we even understand that ‘so-called’ divinity?

On a research mission to provide information for a great galactic computer network (called S.Y.M.A.C.), Emilija Lithuan and her assistants run up against the higher ranks of the Caytalan Church. The punishment that these religious leaders try to stick them with, could possibly have a greater effect than was ever intended.

When their escape saddles them with a famous outlaw, a careful reassessment of what is right and wrong can’t be avoided. How much of what is ‘common knowledge’ is even actually true?

And if it’s not, just how much perceived reality is built upon a lie?